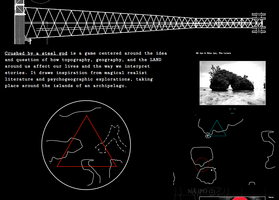 did some work on the game! finally!

first, i updated the itch.io page (this one right here!) + made it public, and also wrote my first devlog recapping the game's beginnings in 2016–17 & tweeted about it: ●

in terms of actually working on the game itself – earlier this week, i rewrote/reworded a lot of stuff to change the overall tone/plot/story into something i'm actually happy with. many island passages, the radio tower section and some other stuff got changed. also tweaks as to when the minimap first appears, along with changing some character descriptions to be adjacent to real life stuff.

i also modified a macro found on glorious trainwrecks (where else) to get hover-links working for the intro, which makes it significantly less tedious than before to get through the short little "intro" (i.e. you just have to move your mouse around, not repetitively click on things to go to each next passage).

(also, gotta say, i'm honestly pretty proud of my janky dev tools/shortcuts to get around – debug mode that can be turned on/off, enabled/disabled, etc. – and it's fun, for me at least (and maybe only me), just to navigate around the hypertext structures in the game.)

on thursday night/friday morning i adventured into the heinous land of javascript to get the page to track the position of the mouse cursor, so i could do what i'm calling "map viewfinder" stuff, moving a background gradient around and giving a "window" or flashlight onto a view of the archipelago while exploring, in a new section i plan to add. sort of fog of war-ey. i also tweeted about this here: ●

i'm planning to explore each of the "primary" five islands (represented by one child each, or shown through their eyes) separately, focusing on specific concepts/sets of ideas for each, which will lead to the eventual ending. i've already sort of done the intro to the first one (or to this whole section), and hopefully the map viewfinder can be a repeated mechanism that becomes a bit of a ritual, in a way, with players returning to it four times, in the interim between focusing on each of the different islands. intro, followed by focus - retreat - focus - retreat - focus - retreat - focus - retreat - focus. and then a final, different kind of 'retreat' into an ending. in writing this, it reminds me of act iv of kentucky route zero, where you choose to go to (or not go to) specific locations/stops on the river multiple times, but hear stories as the boat floats down the river in between these specific well-defined moments as well.

i'm excited by how the island order will change (influenced itself by the specific viewing of land in different orders during each viewfinder period, with different text appearing for each specific combination…) and thus how the narrative and story can and will be different for each, and how i can make this something actually meaningful in the end.

Crushed by a steel god

an (unfinished) story about the LAND